Bud has always been great about visiting the dentist, because we set the tone early with low stress/low pressure visits that were followed by fabulous prizes.  (What's a little bribery when oral health is at stake, right?)

He does so well, in fact, that I've started taking it for granted, and yesterday I did the unthinkable - I forgot all about the prize.  As we drove toward the dentist's office, Bud casually asked what would be waiting for him when he finished.  After a few seconds of panic, I decided to come clean. I told him I'd forgotten and said that we'd visit Amazon or iTunes when we got home.  He happily agreed.

His appointment was as good as they get.  He sat patiently in the waiting room for 20 minutes as the staff ran late, then went in happily on his own with the hygienist. He got glowing reports when they finally delivered him back to me.  So I was happy to set him up on Amazon when we got home.

Bud spent some time in the afternoon surfing to find the prize that he wanted most and before long, he said he'd found it.  It was this: 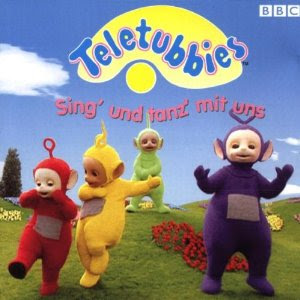 I can't say I was thrilled by the selection of this particular disc.  But I really should be more understanding.  When I was Bud's age, I had the same relationship with the Beatles that Bud has with the Teletubbies and I distinctly remember the stretch of time when this was on high rotation at my house: 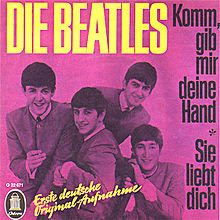 In tonight's performance, the role of Bud will be played by David Rudman

For weeks now, Bud has been telling me, "When I'm 14, I will be voiced by David Rudman."  David Rudman is the voice of Jack on Jack's Big Music Show and the voice of Baby Bear on Sesame Street.

The concept of voicing - and the associated lengthy, in-depth discussions about voicing - are not new for Bud.  He has long been interested in who does which voices in his favorite shows.  Did you know, for instance, that Robin Stevens, who plays Grandpapa on Boohbah is also the voice of Tom on Tots TV as well as the voice of Jim on Rosie and Jim and that he also did the voice of the Singing Man in the Pink House in the British version of that segment from the Teletubbies?  And, as an aside, if you live anywhere other than the UK and you are not Bud, have you ever heard of most of those programs?  No, I didn't think so.  But, believe me, if you lived with Bud, you would know more about them than you ever dreamed there was to know.

But back to David Rudman.  I have to admit, I hear so much about who-does-which-voices that I really didn't pay much attention to the "When I'm 14, I will be voiced by David Rudman" announcement the first several times I heard it.  But the other day, something clicked with me when Bud said it.

Bud will be 14 in September.  His body has started to change and I have started talking to him about the changes yet to come.  You will have more hair on your body.  You will get taller.  You'll start to shave.

Your voice will change.

I'm not sure how Bud got from his voice changing to David Rudman, but I'm certain that's the connection.  I don't know if he thinks he gets to choose this new voice that will be his, or if he thinks that before long, someone else will start doing his vocal work for him.  I don't know if he just supposes that he'll have the sort of kid-like grown-up voice that David Rudman has given to Jack.  Or maybe he just thinks David Rudman's voice is cool and "When I'm 14, I will be voiced by David Rudman" is the Bud version of "When I grow up, I'm going to be an astronaut."

Bud has listened politely and humored me as I've fumbled my way through the explanations.  But we both know that he's having none of it.  As far as he's concerned, the matter is settled.  When he is 14, he will be voiced by David Rudman.

I just hope that David is ready.

A follow-up and a request

Several months ago, I asked for your input on social pragmatics for a piece I was writing.  You were incredibly helpful and a couple of you asked me to post the piece once it was finished.  It's out now, in the Summer, 2013 edition of Thrive magazine.  You can read it here.  (And if you're interested, I have a humor column in the same issue - right here.)

And now I'm back to ask for your input on another piece.  In this one, I'd like to focus on the challenges of finding childcare for a child with special needs (and I'd like to point out that I'm looking at "special needs" more globally, without a specific focus on autism, so if you have a friend who is a special needs parent and you can point them in my direction, I'd appreciate it!)  I'm thinking about both ongoing care (daycare for toddlers and preschoolers, afterschool care for older kids) as well as occasional care - since we all know that popping out for a quick dinner and a movie can take a month's planning when you have a child with special needs.

I'm seeking advice, lessons learned, success stories, and not-so-success stories.  Please share what you have - and, if you can, jump over to the Facebook page, where I'll be posting more pointed questions on the topic.  (And, again, if you know parents with children who have needs other than autism, I'd love to hear from them as well!)

Thanks in advance for your help.  You are the best resource I know.