Once again, this year, on April 2, World Autism Day, Bud and I will be swapping out the soft-glow energy efficient light bulb in the entryway of our house for a bright blue bulb, as we join with other households - and with the Empire State Building, Rockefeller Center, Niagara Falls, the Sydney Opera House, the Hungarian Parliament Building, and many other public venues worldwide - in the Light It Up Blue campaign, sponsored by Autism Speaks and directed at shining the spotlight on autism.

Last year, I engaged in some dialogues about the relative merit of the campaign.  This year, though, our blue light feels a lot more personal than political.  And I'll tell you why.

Bud knows he has autism.  A couple of years ago, as I was preparing an autism presentation for his classmates, my mind kept coming back to the disability rights philosophy "Nothing about us without us."  I knew that it would not be helpful to Bud or to his classmates for him to be part of the presentation, and yet, I also knew that it was not fair to give them information about him that he didn't have about himself.  I'd never hesitated to use the word "autism" in front of him, but I'd also never talked to him directly about it.

And so, before I met with his classmates, I sat down to talk with Bud about autism.  As you might imagine, Bud's not an analogy kind of guy, so I steered clear of any mention of toasters or hairdryers.  Instead, I tried to keep my explanation clear, direct, and on point.  I told him that people have brains that work in different ways, and that the way his brain works has a name:  autism.  I told him that autism makes some things harder for him than they are for other kids, and it makes some things easier for him than for other kids.  He acknowledged that he'd heard me - I think he said "oh" - but he didn't seem particularly interested.

"Can you think of some things that are really, really hard for you, Bud?" I asked.

And without missing a beat, he responded, "Change is hard."

"That's exactly right, Bud," I said.  "Change IS hard, and sometimes it's a lot harder for you than it is for other kids.  And that's because of autism."

"And can you think of some things that are really easy for you?" I asked.

"That's right, " I said.  "Computers are easier for you than for other kids because of your brain's autism.  And you know how you can say all the words to TV shows?"

"Most other kids can't do that."

"Nope.  But it's easy for you because of autism."

From that point on, I'd bring it up from time to time.  If he was struggling with something, I'd help him take a step back by explaining that it was his autism that made it difficult for him.  Once, when we were at the mall, we heard a child making loud but cheerful vocalizations that were echoing through the aisles.

"Why does she keep doing that?" Bud asked.

"She likes to do that, Bud," I answered.  "You know how you like to say the words from Teletubbies?"

"You like to do that because of your autism.  Well, she has something that makes her like to make that noise.  It might be autism or it might be something else.  Everyone is different."

"Oh," he said.  And then, his sensory integration rattled because of the interplay between the other child's reverberating cheerful vocalizations and his own autism, he added "Let's get out of here."  And we did, as I chalked one up for emerging self-advocacy skills.

A short time later, Claire Hughes-Lynch's wonderful book came in the mail.  Bud, always hopeful that any package delivered to the house will include a surprise for him, asked what was inside.

"Yes!  Just like you,"  I said, as he skipped away, delighted to be the sort of person that people write books about.

So, over time, "autism" became a familiar concept around our house - though, to be honest, Bud sometimes has a hard time remembering the word itself  ("What is it, again?").  And so, last year seemed like the right time to introduce the concept of Autism Awareness, through the lens of the Light It Up Blue campaign.

A few days before April 2nd last year, we went together to Home Depot to pick up a bulb.  "Remember, Bud?" I said.  "We'll light up this blue light bulb to remind everyone who sees it that people with autism are important."

And then, it was April 2nd, and as night fell, I went outside to take out our old light bulb so we could light the house up blue.  It was dark enough that the bulb cast an impressive glow, and I called Bud over to see it.

He stood at the front door, pressed his face against the glass, and stared with wonder no less profound than it would have been if he'd been looking at the northern lights or at a sky filled with the flashes of a meteor shower.

I crouched down next to him and stared out the window at our blue-tinged front yard.

"Remember Bud?"  I said.  "Remember what the blue light means?"

I prompted him with the words we'd been using for weeks.  "The blue light reminds everyone who sees it that people with autism are..."

And as he stared out into the blue, he answered softly in a voice that came from a million miles away:  "Awesome."

So, yeah.  We'll be lighting it up blue again this year.

To remind everyone who sees it that people with autism are important.

And, more importantly, to remind Bud that people with autism are awesome. 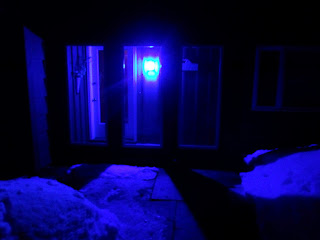 I keep trying to figure out a good way to try to explain my sons Autism to him and the blue light might be a good conversation starter. How old was Bud when you talked to him about it. I see so much of Bud in my son, your blog always brings a smile to my face or a thought to my brain. Thanks

Thanks, Mark! Bud was in fourth grade when we first talked about it.

going to buy my blue bulb tomorrow in honor of awesomeness. xoxo

Anyway when it is time, I will take a cue from you, because I think the way you described it to Bud is wonderful.

I'll be thinking of you and Bud when we light it up blue too.

wonderful post! I love how you approached talking to Bud about autism and I adore his take on it. You are both right.

This blessed me. I have been told to not talk about having autism with my granddaughter, age 6, because she has not brought it up yet. I'm not so sure...

And now when I see a blue bulb I will think "awesome". Maybe it's Awesome Awareness Day?

I have an eight year old son, and has been wondering the appropriate time and conversation to have with him. Your blog gave me some good ideas. Thank you.

This was a wonderful story. These high functioning kids are way too smart to not tell them what Autism is. My sixteen year old says that he feels sorry for other kids who don't have Autism, that he's the lucky one!

I had a startlingly similar conversation with my 8 year old who overheard me use the word on the phone (all our family is out of state). He took in stride and I thought it didn't matter much to him. Weeks later he got sent to the principal for "making a bad choice." She called me amazed that in their discussion he told her, "I have aspergers, you know." I love how he cuts through and shows me clarity all the time.

I wish I could put a good spin on the blue campaign, but I just can't do it. If anyone were to see my blue light, then they would think it is ok with me if they donate to AS. And AS would take that money and pay people crazy amounts of money for their jobs, use it for parties in Aspen and private jets. They take it and have a walk in a town and go back to NYC with the money and never give it back to that community. They would take that money and NEVER CURE or find ways to prevent autism, because then they wouldn't have jobs! I think it's incredibly sad that it is that way, but it is. :(

Thank you for your beautiful words.

That is a great read! My son also has autism he is only 3, didn't really know how to explain it to his brother and sisters, thanks to you I do! Thank you

Your explanation on why we light it up blue was such a great one. I would like to share your post on my FB page if it's ok with you. I think it would bring so much awareness to so many people who don't know why we do this. I looked on your blog to see if there was a share button for me to click but was unsuccessful.

Thank you, thank you, thank you! I have tried to talk with my son about autism, but never seemed to get the words right. I love how you have conducted your dialogue with your son and plan on copying you! This is great. And I LOVE what your son said. He's right: people with autism are awesome!

Thank you for sharing this important step & private moments with us. My son is three, and I have already been thinking about how that talk will go with him. This will be our first year lighting it up blue because we want the whole world to know that people with autism are VERY AWESOME!

Thank you so much for Sharing this!! I have a hard time myself wondering when the right time to tell my son he has autism is! I feel it is very important for him to know instead of him knowing he feels different yet not able to put together what it is!I will also find that book like today! Love to you and Bud....from me and tommy xo

Bud IS awesome, just like all of our kids. If any of you parents are looking for a book to help you discuss autism with your ASD kids, may I humbly recommend "Ben Has Autism, Ben Is Awesome" - available at jasonandnordic.com. Reviews at http://notanaffliction.blogspot.com/p/my-book-coming-very-soon.html

I love how clearly you explained it to him. True awesomeness.

This is a great posting straight from the heart. Alot of people believe that Autism Awareness Day has gotten too political over the last couple of years. Our company, Bilinguals Inc. / Achieve Beyond pediatric therapy & Autism services, support this day because Autism Speaks has lobbied to get many laws passed in favor of children with autism and makes the whole country more aware of the impact autism is having around the world. We are glad that you continue to support the day and help continue to build awareness for Autism.

Amigo finally reached a point where he can say "I have an excellent memory" and know that he's unusual in a very good way. In his case, it came about when his teachers recruited him for Forensics. Talk about a confidence builder!

Completely agree, it all begins at home

Fantastic. Awesome. Kudos. A big bow to you mom. I often wonder how much progress the autism community might make if more parents were...well, like you! Bless you. And Bud.