Unity, or: What I did on my summer vacation

You know how sometimes you're just in the right place at the right time? I had a lot of that this week.

First I discovered that my vacation schedule was coordinating well with the work schedules of Barack Obama and Hillary Clinton, making it possible for me to join them at their historic unity rally in the tiny, rural town of Unity, New Hampshire.

Then I discovered that friends of mine were equally available and equally up for the adventure.

We spent an extraordinary amount of time simply getting to the event. No cars were allowed in town, so like everyone else who attended, we drove to a ski area, stood in a long line to board a school bus, then rode, rode, rode across the back roads of New Hampshire to reach the tiny elementary school that was hosting the rally.

When we arrived, we discovered that most of the other 4,000 people in attendance were already there. My friends and I hiked about a third of a mile to find the end of the line of people waiting to walk through the metal detectors to enter the field. We'd been in line a short time, chatting and soaking up the atmosphere, when a woman with a hand full of wristbands sidled up to me and said in a low voice, "Are the three of you together?"

I couldn't imagine where this was going, but I told her that we were.

"Would you be interested in sitting on the bleachers behind the podium where Barack and Hillary will be?" she asked.

"Yes, we would," I answered, as I turned to my friends in disbelief.

She handed us red wristbands, then we joined a small party of other folks she'd pulled out of line as she marched us past the throngs of people waiting to enter and up to an entrance for special guests. We entered at the same time as Carol Shea-Porter, Congresswoman from New Hampshire.

We continued on with our little group of wristband-wearers and travelled through a maze of barricades and bouncers, until we reached the front of the field - a small bleacher section set up directly behind the stage and directly in line with a bank of news cameras.

The pied piper of wristbands passed us off to another campaign worker, who looked the three of us over, sized us up on I-don't-know-what criteria, then said definitively, "Okay, this row - first you, then you, and then you on the end." I was the "you" on the end.

More campaign workers came out, handing us signs, working up the energy, and reminding us that we were the "face of the campaign." The energy built to fever pitch when Barack and Hillary took the stage, and we spent the better part of an hour applauding and hooting and chanting and holding up signs and - mostly - continuing to marvel at our outrageous good fortune.

When Barack and Hillary left the stage to work the crowd, we left the bleachers and made our way down to the field, with very little thought that we'd actually make contact. But - since that's just how our luck was running - we did, and now I can say that I shook the hand of Barack Obama, the next President of the United States.

Then it was over and there were 4,000 of us waiting to climb back onto school busses to make our way back to our cars. We decided to take our time and not fight the crowds, so we wandered back through the maze of barricades to try to find one of those hamburgers we'd heard the Kiwanis Club of Unity was selling.

On our way, a woman with a video camera stopped us. "Could I ask you a few questions?" she asked.

Well, of course she did. It was that kind of day.

She interviewed both of my friends, who were characteristically thoughtful and articulate - the kind of interviewees the camera loves. As she said goodbye we asked who she was with, knowing that she could easily be there representing the local cable access channel.

Not so. Her response: "Associated Press."

By this point we were downright giddy. We ate our burgers and talked about whether or not we would ever again wash our Obama-shaken hands and watched as slowly, slowly, slowly the crowd thinned as the campaign staffers loaded school busses and sent them off to their lots - a round trip that meant it would be an hour before each bus would return to reload. We were among the last hundred or so to board the busses - which we did, not in ordinary rain, but in a downpour of epic proportion (so much for never washing our hands again...).

I spent the evening surfing the web and looking at footage from the event - "Bud, look! There's Barack, and Hillary, and Mom!"; "Hey! Hillary and I are making the same face in this picture!"; "Why am I the only person in the crowd who is acting like she's at a rock concert?" MSNBC, ABC, CBS - I was everywhere. It seems that the campaign staffer did me a big favor by insisting I be the person sitting on the end. I was in direct line with the cameras, unlike my friends who were visible when the cameras panned the crowd, but were cut out when they zoomed in on the candidates. I felt bad for a minute - felt like the bad spotlight-hogging friend.

Then I remembered the Associated Press.

Yes. My friends are in syndication - close up, larger-than-life, and articulate as ever. Our fifteen minutes of fame has already lasted an hour and a half.

And the rally itself?

Fired up. Ready to go. 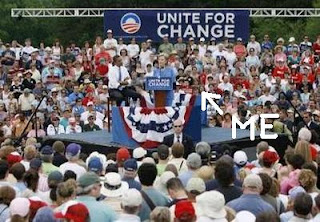 hey, it's like with the Beatles----you are the Zelig!

"I shook the hand of Barack Obama, the next President of the United States." GOOSEBUMPS when I read that.

Sheesh, next thing you know, Dierks will be playing at the inaguration and you and Bud will be invited backstage...SIGH...I hope so!!

My faithful lurking of your blog has paid off! What a thrill for you and your friends and not to mention, your blog readers. Your son is lucky to have such a politically attuned mom.

We'll be looking for you at the swearing in ceremony: pulled out of line again and sitting with Barak.

You have GOT to be kidding me. YOU SHOOK HIS HAND?! Sigh. I am in awe. Congratulations!!

How cool is that?

You are, like, THIS far away from a cabinet position.

Sounds like an awesome day! I'm happy you had such a meaningful experience.
I did you one better, through.

I got to shake hands with, and eat lunch with, Peyton Goddard.
Peyton did not type her first word until she was close to 20 years old. A few years later,she graduated valedictorian of Cuyamaca College. I'm glad this community realizes that heroes comes in all shapes, sizes, colors, and ... neurologies.

That is most awesome. What a day! Sometimes everything is just aligned perfectly.

What do you think it was about you three that made you background-worthy? (I mean aside from your brilliance and beauty?) There must be a science to this.

I was thinking of Bud the other day, Dierks was playing in Oshkosh while I was driving all over Illinois chasing down Johnny Depp for my son.

Awesome! We saw a lot of Obama lawn signs when we were out and about this weekend. Very encouraging. And then there was this great t-shirt someone was selling online: "Obama '08: This time I want a smart president."

You knew him when!

Oh, I am SOOOO jealous! Yes, i expect Obama to be the next president, and I expect Senator Clinton to be in his cabinet. What fabulous luck you had!

Gretchen, my hunch is that it had something to do with the Everyman quality I have that makes strangers tell me all about their lives. One of the friends I was with has the same thing happen all the time.

Osh, I admire your dedication re: Johnny Depp, but really - you shoulda stayed in Oshkosh to see the show!

Wow! It must run in the family. First Bud with Dierks...

Glad you had such a great time!

MILLIONS of good! Congrats. I was watching and scanning the crowd for you or others I knew were there. Sorry I missed ya!

It is hard to act excited when you are staring at the candidates backsides for an hour. Great job on the enthusiasm!!

How cool. You are now a little piece of our nations history.

That is so exciting. I had a similar thing happen to me (twice) but I was at a rock concert!

shut up! You are so awesome, once again a great story, a wonderful adventure. Wow - it's you who is the rock star!

Good grief! A real red letter day. I'm not surprised you had chills, I'd have choked on my burger.

How are you hands now?

I can send you some latex gloves if you're running short.
Cheers

I'm VERY late to the party, but how cool is that!