In a recent post, I said that I thought the seasons were changing. I said I thought we were turning a corner.

Now I'll say this: it's lovely around this bend.

The sun is out, literally and figuratively. It has been warm and mostly sunny for more than a week. Spirits across campus have lifted immeasurably as students have ended the hunkering down of the snowiest winter since 1874, swarming the quad in shorts and halter tops and flip flops, playing wiffle ball and studying in the sun on patches of greening grass twenty feet away from still-melting snowbanks.

Which reminds me - VTBudFan asked for an update and wondered how her April 18 guess had fared in Ice Out 2008. Had we been focusing on the backyard only, she would probably not have been that far off, as this is what it looked like at the start of this week: 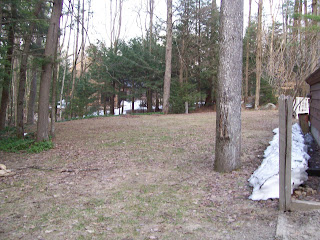 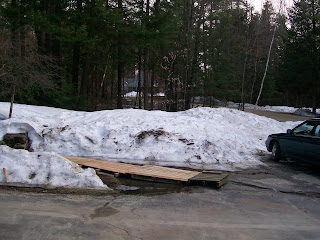 Honestly, though, I can hardly even see the snow in my yard with all the sun in my eyes. But it's not just the blue skies, warm weather, and campus festivities that have me celebrating this seasonal shift. It is the change in my son that has accompanied the change in the weather. Is there a direct causal relationship between the weather and the behavior? I don't know. It might be that we have finally found the right balance in medication. It might be that the strategies and routine we've implemented in school are finally paying off. It might be that the upheaval we experienced in our family is now a full year old and Bud has been able to readjust and settle in.

I don't know what has caused it; I only know that it's glorious.

Bud and I spent last weekend hanging out together. We ran errands, we raked leaves, we had a pizza picnic, we went to the playground, we visited the library, we took a walk, we worked at my office, and we ate brunch in the college's dining room. We had fun together. All weekend.

There were moments of disagreement and flashes of tension, but that's all they were: moments and flashes. The weekend was even, and happy, and stress-free. Bud sang a lot. We laughed together. We hugged and high-fived and held hands. Saturday and Sunday were like the Mom and Bud Days of old. I spent all weekend smiling and thinking "he's back!," wondering if behind his own smile, Bud was thinking "she's back!"

And the mood has continued this week, even though our schedule has been disrupted because I had to work two consecutive late nights. Bud was home with his grandparents, happy, cheerful, and charming, and he called me at work each evening to sing me a song and say goodnight. Tonight, I was home again and we slid back into our regular routine seamlessly - no bargaining, no retribution, no payback. Just an enthusiastic welcome with wide-open arms and a big toothy eight-year-old grin.

It's the start of a new season. We're back. And we're better than ever.

"We had fun together. All weekend."

And e'er after! "Serenus" is Latin for "clear blue sky" and I think of this whenever I use the word "serenity"---wishing you and Bud more than much in the new season.

Things have been going pretty well here too. I do think the return of spring and more daylight lifts most people's spirits.

Thanks for the ray of sunshine this morning. Spring always does come again, even after the longest winter.

I LOVE THIS!!! i am cheering for you both! the snow, she is a-melting. hearts are warming. spirits are on the rise.

Okay, even though I lost the Ice Out contest, I can't help being happy for you and Bud!

I love love LOVE when my son and I "click." Have another great weekend....and a wonderful Spring.

Yes, yes! Over here, too! I feel like cartoon birds follow us around. I feel positively Disney.

I am so glad that you both have turned a corner. Glad, but not surprised. The NOS' are sturdy folk.

Enjoy every millisecond. I'm throwing confetti for you over here.

Smiling at the vision of you and Bud having such a peaceful easy time of late. Hard won and well deserved by both of you. Spring must be here as it sounds like you are both positively blossoming again.

I'm so happy that you're enjoying some calm, happy moments after the "upheaval" that you have gone through.

Thanks for this uplifting post. I'm thrilled for you both.

Blue skies...smiling at me...
I can hear the melody and feel a smile growing. Wishing you the happiness of the (spring) season.

What an uplifting and inspiring post! Thanks for sharing. May a breezy spring move into a delightful summer for you.

i just can't believe u still have snow. AMAZING!!

Good for you and Bud!