In my last post, I made the claim that Paul McCartney was "at his goofiest" in the new video for the song "Ever Present Past."

A good friend and fellow McCartney fan sent me an e-mail reminding me about a dance sequence from McCartney's 1973 television special James Paul McCartney. The song was "Gotta Sing, Gotta Dance" and the sequence was... well, it's hard to describe. I wish you could see it for yourself, but I've only got a grainy copy on VHS and it seems that no one has added it to YouTube yet.

Let's just say that compared to "Gotta Sing, Gotta Dance," the video for "Ever Present Past" shows Paul being downright dignified.

Here's a still that captures just a bit of the flavor of Paul in his 1973 glory: 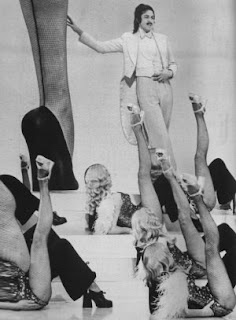 Golly! Just as well we have murky private lives because I'd hate to see a photo of me back in 1973.
Cheers

Oh my. A far cry from the Beatles, isn't it?

Good thing you loved him before then, eh? ;-)

Mommy~dearest, I knew you looked familiar...

Ah, the 70s hairdo. Gack! What were we thinking back then?!