This was a difficult week for Bud. He started second grade, and though he likes his teacher and classroom aide, though he is enjoying time with his best buddy Kelly, though he seems happy to be back in the school building and the school routine, he is having trouble making the adjustment back to the norms of school life - the imposition of other people's agendas, the limited choices available to him, the new sights and smells and sounds that accompany any new classroom environment. And though, overall, he is managing the transition relatively well, it has been complicated by environmental factors - two house-shaking thunderstorms in rapid succession that have rattled him to his core, making it hard for him to relax and harder still for him to focus on anything else except the potential of another thunderstorm arriving without warning.

It was in the midst of this back-to-school-preparation/bad-weather-perseveration that two packages arrived at our house.

Hey buddy... I heard that you are a fan of my music! Thanks... I'm glad you enjoy listening to the records and watching the videos. You may notice that I look a little different in some of my earlier videos. That's because I use to have longer hair and it was pretty curly! But I got a haircut about a year ago. So I wanted to send you a picture and a T-shirt that shows what I look like now.

Keep listening to the music... Thanks, my friend.

Bud was shaking as we read the letter out loud together.

I quickly realized that Bud was giving me the same response I give to him when he asks if he can visit Teletubbyland, play with Zoboomafoo, or interact with some other fictional character he's seen on television: "That's just pretend."

"No, Bud," I said. "Dierks is on TV, but he isn't pretend. He's real. He really wrote you this letter and he really said you're his friend."

"Yeah," Bud answered, his eyes still glued to the letter and registering a hint of disbelief, but his mouth curving into a shy smile.

I opened the second package, which was addressed to me, and found a concert DVD and a note from Cassidy Bentley explaining that she wanted to sneak it in just in case Bud comes around to the long hair.

They are good people, those Bentleys. 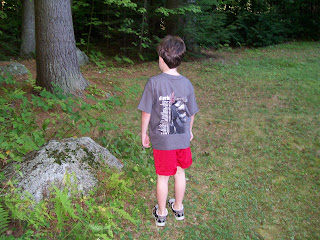 That brought tears to my eyes too. Dierks Bentley just gained himself a new fan.

Oh this is so nice. I just love when good stuff--the restore my faith in humanity good stuff--happens.

Dierks Bentley toured with my hero George Strait. I adore both of them. How wonderful that makes Mr. Bentley in my eyes. My son, Patrick, loves him so much that he puts him on his own top 20 countdown every week....
Jeanette

Jeanette, Bud thinks that George and Dierks have a similar sound. Every time a George Strait song comes on the radio, Bud asks "Is that Dierks?"

Of course, he does the same thing with Keith Urban and Paul McCartney (asks if Keith is Paul). I haven't quite figured that one out yet, because they don't sound at all alike to me.

That is so neat! Bud is a lucky little dude!

Sometimes just the right thing comes when you need it!

Mom without a manual said...

Wow! It really does restore some of my faith in man kind! And that is just so cool how they have reached out to you guys like this!

I might persuade myself to become a fan!
Very best wishes

Wow! How very thoughtful. I am thrilled for Bud.

Wow, that is so incredibly wonderful! I am always amazed when I hear country singers talk about how much their fans mean to them; to "see" it in action like this is heart-warming. I always thought that Dierks was a cool dude--no I *know* he is. And the follow-up with the concert video...the cherry on top! WOW. Makes me want ot write a letter ofmy own to DB just to tell him that he has no idea how many *other* lives that one thoughtful act has touched. He rocks...but not as much as Bud! :-) xo

I agree w/ Nicsmom. Do you have a contact email or something so others can tell the Bentley family that what they did for your son has touched us all? I am seriously tearing up reading this. And I feel like I need to listen to his music, though I am not much of a country fan...

Real people -- good people. wonderful. I have a lump in my throat.

Karen, Dierks actually has a blog on My Space, where you could leave a comment. It's at http://blog.myspace.com/dierksbentley. Or you could send an e-mail to help@dierks.com.

I'm glad you're thinking about giving the music a try. I wasn't much of a country fan either, but I have to warn you... once you start, you may never go back!

awww that was a really wonderful story...thanks for sharing.

Fantastic story. I am so happy for Bud and you. Lovely that he reached out that way. Just curious, did you leave him a post on Myspace?

Wow, how wonderful for Bud! How nice that it happened at a time like this too! I'll have to check out Dierks Bentley and his music as well!

Second grade was a difficult transition in school for my son too (we went through it last year).

Best wishes! Thanks for all your uplifting posts!

I LOVE THIS WHOLE STORY!!

and our very best to Bud on the start of second grade. wow. he's so big!

Thanks for sharing yours and Buds' adventures.

Do you guys enjoy any non-Country music? Might I suggest a lovely new disk from Regina Spektor called "Begin to Hope"??

Hello there. My name is Amber and I am the mom of 7, yes 7, beautiful children. My 6 year old son Joseph has Autism. I found your blog and I had to write and tell you that you sound like a wonderful mother. Your son is so lucky to have you. God bless.
www.xanga.com/mtown_mommy

Hello there. My name is Amber and I am the mom of 7, yes 7, beautiful children. My 6 year old son Joseph has Autism. I found your blog and I had to write and tell you that you sound like a wonderful mother. Your son is so lucky to have you. God bless.
www.xanga.com/mtown_mommy