An open letter to Dierks Bentley

We need to talk. It's about the hair.

Now, I'll admit that Bud and I are relative latecomers to the Dierks Bentley bandwagon. Despite that, though, we are big fans. In fact, Bud has recently announced that you are his favorite singer. Better than Paul McCartney. Better than Raffi. This is big stuff.

Anyway, we discovered you through your latest hit single, "Free and Easy (Down the Road I Go)" and, especially, through repeated viewings of the video. (If you've hit number one on the Yahoo Launch playlist, we have probably had something to do with it.) So the image of you that formed in Bud's mind - the image of you that is YOU as far as Bud is concerned - is the one that he saw in that video.

The one, in other words, of you with short hair. Recently, Bud has been branching out and exploring the Dierks Bentley catalog. He's got Long Trip Alone on his iPod. He recognizes your voice when he hears it on the radio, and so we've also added a number of other songs to his db playlist - like "Settle for a Slowdown," "Come a Little Closer," and "Wish it Would Break." (So far we've avoided "Domestic, Light and Cold," thank you very much.) And now that he's familiar with so many of your songs, he is also interested in mining your video library. We've checked out a lot of your videos on Yahoo.

You know the videos I'm talking about, right?

They're the ones of you with long hair. 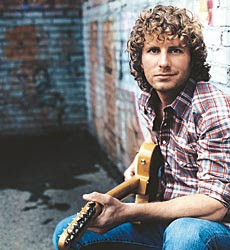 Bud is, to say the least, unsettled by them.

It plays out the same way no matter which early video we watch. The music starts, Bud is delighted, and then you and your long hair appear on the screen.

"That's Dierks when he was little?" Bud asks.

"Well, when he was younger," I answer.

"That's Dierks when he was younger," Bud says.

Bud pauses, watches for another moment, then says, "Let's try something else."

Inevitably, the path leads us back to "Free and Easy" and your predictable, familiar short hair. Now, I know that the length of your hair might seem like a trivial thing to be writing about, but trust me - in this corner of Autismland, it's not. For Bud, your short hair is grounding. It's an anchor.

It's possible that we could work up some flexibility on the matter. Occasionally we are able to watch "Long Trip Alone," since you actually get your hair cut halfway through the video. But only occasionally.

These days Bud is preoccupied with your hair even when there's no visual to distract him. We'll be cruising along in the car, happily listening to "My Love Will Follow You," and a troubled little voice from the back seat will ask, "Dierks has short hair, Mama?"

"He sings 'My Love Will Follow You' with short hair?"

"Yes, I think he has short hair while he's singing this one." And yes, I know I'm lying, but honestly, sometimes you just gotta do what you gotta do.

Anyway, the reason I'm writing: I'm sure you're going to have a long, successful career, and Bud and I plan to enjoy it right along with you. We'd like to be able to watch your videos, check out your tv appearances, and maybe, someday, even see you in concert.

So, the new look? The short hair?

I certainly enjoy the sentiment, but it might be a little more tricky to put into practice.
Best wishes

Guess we all have our "good hair/bad hair" periods! Good music is the main thing though who can best Palmer?

True enough, Kristina. It's interesting that Bud is flexible with changes in Macca's appearance, good hair and bad - though he does refer to Beatle Paul as "Palmer when he was little." I can't really figure out why long hair on Dierks is so disconcerting for him.

Perhaps it has something to do with looking girly? I know that Jaysen is in unrest when his dad doesn't wear a hat- he has a mohawk, so it's really long on top, and Jaysen has said it's "girl hair".

I dunno. I freak out when I see old pictures of myself. Circa 1984.

Bud is so damned cute.j

Um, could it be taht Dierks is totally HOT with shorter hair? Oh, wait, no we're talking about Bud...not me! Sigh. ;-)

Do please share Dierks' reply when you get it? Hee Hee Hee

okay - you never mentioned that he was "THAT GUY"...could he possibly be cuter than Paul?!?! Ohmygoodness...
when I was in first grade my teacher got married over the holidays, and cut her long hair short. She came back with a new name, and a new do...I cried for days, and still haven't gotten over it...I feel Bud's pain. mh

omg i've been wanting to send a letter to dierks, can you please email me the address: at sefraniak@msn.com
thank you so much! this means the WORLD to me!!!!!!!!!!!