Oh, what a book. What a gorgeous, gorgeous book.

I just finished reading Rules by Cynthia Lord, which is a book geared for children in Grades 4 - 7. In other words, it's ostensibly too old for Bud and too young for me. But we both love it, albeit for different reasons.

Bud loves the book itself. I bought it a couple of weeks ago and added it to the stack of books-to-be-read that clutter my bedroom. Bud found it there and adopted it. He carted it around with him from room to room. He tucked it into his bag when we left the house. He browsed through it while he ate his breakfast.

He seemed captivated first by the cover art: 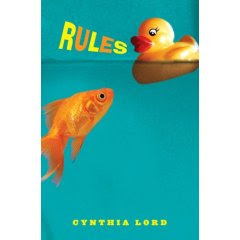 I think it spoke to his artistic sensibilities.

Beyond that, I think he enjoyed the book's heft. The book is lightweight and manageable, but its hard cover and lack of illustrations may have made it feel Important and Grown Up to him. And he seemed particularly delighted to find that when he opened to the first page of this Important and Grown Up Book, he could actually read the words:

What Bud didn't know, of course, was that he was reading a list of rules composed by the book's narrator, twelve-year-old Catherine, to help her eight-year-old brother David navigate the world. David loves rules, Catherine tells us. David has autism.

David is, in fact, quite a lot like Bud, which made me fall in love with him almost instantly. But Rules is not really David's story; it's Catherine's. And it's beautiful.

I won't say too much, because I don't want to spoil it for you. The story passes too quickly as it is - I started the book yesterday, and sped through until there were no more words to read. So I won't ruin it by giving you summaries and synopses and overviews.

I'll just say this: Rules is a book about being a parent, being a child, being a sibling, and being a friend. It's about ability and disability and about how we all manage through life with a healthy dose of both. It's about growing up and growing wise and making mistakes and making things right again. It's about integrity and respect and understanding and love. And it is, very deservedly, a 2007 Newbery Honor Book.

Two things before I end this post. The first is a tip:

I bought my copy of Rules at big box bookstore, but later discovered that I could have ordered a personalized autographed copy through Cynthia Lord's website. I'm sure I'll have opportunity in the future: this is a book that demands to be given as a gift.

The second is a Rule:

When you start this book, read slowly. It will come to an end long before you are ready to say goodbye.

thank you! i've been hoping to find a book for my daughter to read to maybe help her understand her little brother. this could be the one!

I think the cover speaks for itself! Looks lovely.

Mom without a manual said...

Thanks! I just put it on reserve at my library! I'd heard about it before but in the midst of chaos it slipped my mind. Thanks for reminding me and getting me excited again to read it!

I went and ordered my copy from her site today. I am considering branching out into a new area with my job; early intervention specialist. If this book is as great as you indicate,it may be part of my introduction basket when I come to new homes.
Thanks for the suggestion!!!

Thanks, mom-nos! I picked up a copy today and can't wait to start it.

i SO want this book! it may be JUSt perfect for fluffy right now. he so needs a pal. maybe this book could be a pal until a flesh and bones one appears...

I checked this out from my school library. I think I need to own it. I had trouble reading parts of it; my own daughter, with a disabled brother, could have written it.

Beautiful review of a wonderful book. I read a copy from the library, but I think I'll buy a copy from your link so my son and daughter can read it someday.