Saturday in the park

According to my son, Saturdays and Sundays are "Mom and Bud Days." Each week, somewhere around Thursday, we begin discussing the agenda and making plans. I think the planning gets us both through our weeks.

1. A visit to the library so that Bud could fix all the clocks (a la Curious George).

2. A stop at Dunkin Donuts for munchkins (him) and medium-coffee-skim-milk-one-sugar-and-a-caramel-flavor-shot (me).

3. Playtime at the park.

We were having a lovely time at the park when a family of four arrived with their dog. Bud was nervous as they unpacked the car, and became visibly agitated as their dog frolicked near them.

"Don't worry, honey," I said, loud enough for the family to hear. "That doggie won't come near you."

"We have a dog phobia here," I shouted back, in as kind a tone as I could muster.

The dog barrelled toward us, as if to prove just how friendly he was. Bud darted away with his hands on his ears, shouting "No doggie! Go away!"

"A very, very, severe phobia!" I shouted over my shoulder, a bit less kindly, as I chased after Bud spewing comforting words.

The dad moved to catch his dog and said, in an attempt to reassure Bud, "Yeah, but - he's very friendly."

I stopped when I caught up to Bud, then turned to the dad and said, "Yeah, but - he's autistic."

"We'll keep him on a leash," the dad assured us. I thanked him, and the family moved to a different area of the park.

Bud and I continued playing on the slide, climbing inside the big plastic tube together and copying each other as we drummed out rhythms on the sides.

Later we went for a walk. Bud stopped at every hole in the ground to check for prairie dogs. Then he headed for his favorite stream so he could "skip some stones" (or, more accurately, hurl stones into the water.)

All things considered, it was a very good day. 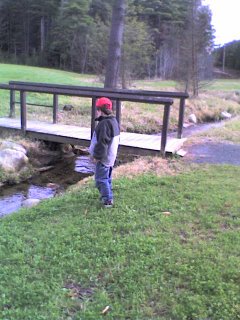 a very good day indeed. i love the picture!

i tell you, we HAVE a dog and even so, fluffy can get very frightened and overwhelmed by the sight of an unknown dog bounding toward him. i am VERY mindful of beegu on her leash when we come to kids. i see that look in their eyes and i take her FAR away. sorry it took that guy so long to *get* what you were saying. hopefully, now that he's been educated, he'll keep his dog close at hand.

So glad you had such a great day. Personally I'm tired of dog owners telling me that their dogs are friendly, oblivious to the fact that someone can have a phobia. I've even had a dogwalking pedestrian chastize me that I should buy a dog so I can teach Sweet M to love dogs. So presumptuous.

I am very interested that so many autistic children have dog phobias.

I think they know something that we NTs don't.

Whenever I see people picking up their dog poop from the NYC sidewalks (it's a law), I wonder who has domesticated whom.

Keep on having fun and posting. Love your posts!

Been reading all month (all hail NaBloPoMo) and had to comment on this post. My Bub has dog phobia too and it's maddening when the 'dog people' don't get it. Bub's reaction used to be very intense (screaming at the top of his lungs and running for the closest safe adult), but he's mellowed since my sister got her dog.

Anyway, just wanted to say hi and that I'm enjoying your blog :-)

Okay, this isn't going to come out right and will possibly be insensitive but I *wish* we had a dog phobia in our house! :) My husband loves dogs. I, on the other hand, could do without them. Both of our dogs died within the last six months and there's talk already of another one taking up residence with us. My last post was about how hard it was for C when our dog died last week. I want him to be happy but...ugh, back to dog hair, dog drool, dog snoring, dog farting...

Henry likes to throw things into the water also.

Thanks for sharing more pictures!