Creativity, thy name is Bud

I have mentioned previously that I am continually amazed by Bud's creativity, and by the level of "flexibility in his rigidity."

The other night in the bathtub, Bud was lining up his foam letters to make the alphabet when he discovered that he was missing the letter "I."

We dug through the bubbles and pulled up letter after letter, but there was no I in the tub. Uh-oh, I thought, here it comes. I braced myself for some heavy perseveration on the missing I.

Then I heard Bud's voice: "This could be the I!"

I looked up and saw that he was holding up a whale-shaped cup where the I should be.

"It sure could be the I," I said. We hung a suction-cup hook in the spot and Bud dangled the I in place: 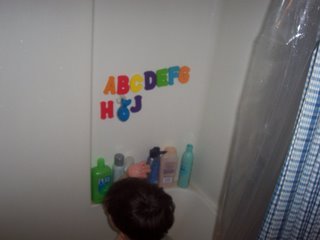 It's this kind of flexible thinking and creative problem-solving that makes me think that, even with all his challenges, Bud is going to be just fine.

I am going to take a cue from Bud today and exercise my flexible thinking with Owen's school. Thank you Bud!

I know how big an achievement that is- the willingness to substitute- yes, I think Bud is going to go far.

Perhaps that's how hieroglyphics were conceived of.....

That is fantastic! And the fact that he resolved his 'discomfort' without perseveration and with problem solving is just great!

The more WHALE read about Buddy the more happy WHALE am :-)
Big hugs to you both!

I was just strolling through some old posts, and the word "fwhalene" made me laugh out loud and gave me the lift I needed to go grocery shopping. :)