They're not the first descriptors that come to mind when you think about autism, are they? And yet, Bud is all these things. He has always had great pretend play skills and an active imagination. He rarely tires of toys because he continually finds new ways to play with them. When he wants to play-act a particular scenario and he doesn't have the right equipment, he will happily find a way to use whatever he's got. Want to play Little Bo Peep but find yourself short on sheep? No worry: toy dogs and elephants can fill the roles and learn to say "Baaa." What? No Bo Peep doll? The Fisher Price farmer would be happy to step in. At the beach with no toys on hand? This big rock can be Bo Peep; these twigs can be the sheep.

I was surprised, then, when Bud approached me the other day and asked me to help him make the dancing bear from a favorite Teletubbies segment. I knew that if he wasn't content just swapping out a different toy to create the scene, then he must have had a particular image in his head and he was certain that I could deliver. I, on the other hand, was less certain of my abilities.

I was familiar with the segment, of course. In it, a cylindrical circus-tent looking object drops from the sky into Teletubbyland: 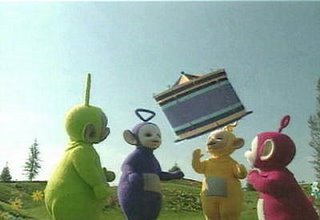 The Tubbies gather around to watch as the sides of the tent part and a little bear emerges wearing a hat and vest, carrying a cane, and dancing a soft-shoe: 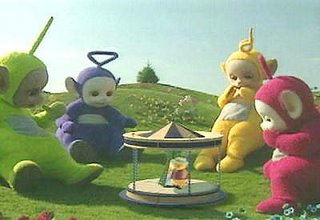 "I need the dancing bear and the tent," Bud told me. "Can you help me make it, Mom?"

"With paper," he said. I was resistant and could not imagine what he was envisioning. I found a little toy bear among his collection and hoped that it would be enough to satisfy him. It wasn't. He clearly had something else in mind.

"Okay, Bud," I said. "Tell me what you want me to do." And he did. One step at a time, he told me what we needed to turn this plastic bear into the magical dancing bear and I scoured the kitchen drawers to find supplies that would do the job. Twist-ties from the bread became the requested hat and cane. A torn paper towel became a vest.

"He needs shoes, Mom," Bud said. I ripped tiny pieces of blue painters tape and stuck them to the bear's feet. Bud thought it was a perfect solution.

"Now the tent, Mom," he said, once again walking me through the stages. We didn't have a picture in front of us, so I just followed his directions about what it was supposed to look like. I don't know what sort of picture he had in his mind when we began, but he grew more and more delighted with each completed phase of construction.

In the end, our collaboration yielded this: 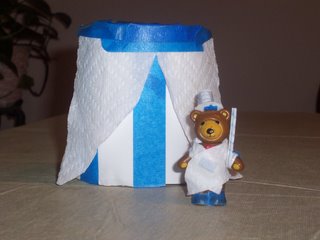 Bud is thrilled, and has had the bear performing all weekend.

I don't know for sure, of course, but with this sort of innovative vision, eye for detail, and collaborative work style I'd say that Bud's got a promising future in the film industry; I'm guessing Production Design. And it looks like we've got our first entry for his portfolio.

ah yes, the little dancing bear... as much as the tubbies drive us crazy, they have been an incredible motivator for our son to work with us.
You get an A+ for both the final presentation and for intense sleuthing. This will become a project for us as well; I can only hope that someday my son will be able to present his desire as well as Bud did.

I've been following your blog for a few weeks now; you've challenged me with many of your posts and I really appreciate that.

Duncan loves that dancing bear too. I have drawn it LOTS of times for him. I wasn't able to find a picture of it online, which disappointed him as he loves to Google images.
So I have always had to draw it from his instructions too, and it has to be just right!

MOM- I think you are the best mom EVER!

This is a good reminder to me- don't just blow Henry off when he asks for something that seems impossible or un-fun...

You and Bud are a crafty bunch- you are welcome here anytime! Do you think you could help build the robot with moving arms and legs that Littleman keeps asking me for? Oh, and it needs to be 12 feet tall. :)

Actually, Duncan just saw your blog picture, ran off to get the felt-tip pens, and asked me to draw the dancing bear. You've started a craze Bud!

that is awesome! my daughter (not on spectrum) is the one who sounds like bud! she doesn't need the appropriate toys, either - i've seen her play princesses with lego guys or rocks!

And then there's the Ships, the Animals, and (Charlie's absolute favorite) the Tree----all duly recreated in days gone past with quilts for the water, animals for the animals (not necessarily the ones in the Teletubbies segment), and a little tree paperweight I found for Charlie online.

(I still have the Tree music on my iPod.)

My daughter loves that Teletubbies episode!! Kevin does the same stuff as Bud. In January after we returned from Disney he recreated the park in his room!!! Right now he is recreating the sets from King Kong (current favorite movie) When I see Kevin telling other kids what to say when they are playing, I feel he may have a career in directing. Maybe he and Bud will work together!!!

i love it! we don't watch teletubbies but may we come over and watch you and bud create??