Lately, Bud's living art has had a tasty theme.

It's also had a Warholesque quality to it, as Bud's been creating art from the things he loves, in multiples and variations.

For weeks Bud created a recurring montage that appeared several times a day in various locations around the house, which I titled Still Life With String Cheese. This work was comprised of four unique elements - a pear, an orange juicebox, half a blueberry bagel, and a stick of string cheese. Each particular art display had a twist that gave it it's own unique flair: the elements appeared in different orders, sometimes touching and sometimes not. The visual focus shifted as well: sometimes the bagel seemed to be at the center of the work; at other times, it was the pear. Sometimes Bud added a surreal quality to the work by taking a bite of the bagel, drinking the juice, or eating the string cheese and leaving only the wrapper. 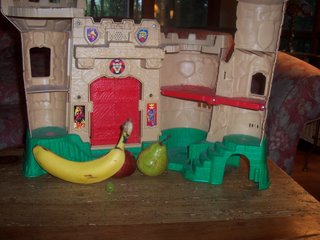 As with Still Life With String Cheese, there have been countless variations on the theme. The elements remain consistent: a banana, an apple, a pear, and a single green grape; but, once again, the arrangements vary and each new tableau appears to send a new message. (This one speaks to me of the fall of the apple season and the supreme reign of the summer fruit.) Of course, the meaning in the art is also contextual, and among other locations we have found these tableaux on the kitchen counter, on the steps, on the living room floor, and, of course, in the castle.

As I prepared this photographic documentation of Bud's living art, he stood behind me, the artist becoming the director as he cued the talent:

Fabulous! Exploring and experimenting with various compositions, light quality, and essense of the objects that create the whole feeling of his pieces. We have a true artist in our midst!
I can't wait to see what he does next :o)

I'd like to compare these tableaux to those photos Bud took back in the summer, or of his Xmas presents......

Does he also play appropriately with the castle in this picture other than just lining fruit up in front of it? I am baffled at these posts and others which take this lining up of objects as anything other than a stim.

The compositions are lovely, creative, and most certainly indicative of a curious mind at work.

And anonymous, I believe what you are doing is called "trolling".

I love the "art". I also love how you try to look at Bud's perspective. My Sam enjoys food in his "shrines" too. I have often removed hard string cheese from things (the low fat gets harder faster).

To the previous comment. They may be stims, but they are stims with meaning. Some of us moms like to give credit where credit is due, to the beautiful and creative minds of our children.

Keep the "art posts" coming MOM-nos, they are appreciated and great!

Anonymous, yes he does. Beauty is in the eye of the beholder. Or, as Anais Nin said, "We don't see things as they are, we see them as we are."

Zilari- I was asking a legitimate question. Grow up and tend to your own blog.

NOS - Bud sounds like a great child. I work with children on the spectrum and was curious about play skills.

Anonymous - Zilari was, I believe, responding to the tone of your comment, which implied that these works of art that Bud is creating are not actually artwork but stimming (and stimming only), and stims have no purpose and must be eliminated. It also insinuated that parents who do not attempt to dissuade their children from "playing inappropriately" with things (ie, stimming) are "bad parents", not to mention the use of the phrase "play appropriately", which I personally take great offense to as my brothers and I did not (and do not) "play appropriately" with our toys all of the time. We even lined up our toys and created "set ups".

Hrm. I have some pictures of some of these. I should scan them and make a post, hey?

MOM-NOS - Keep encouraging that artistic flair. Bud will be a great artiste when he grows up, if you do!

Quite a defensive bunch I must say.

Okay - this is my public apology to all, as I am inclined to process "outloud", so please excuse the rambling. I address this blog to the "for what it's worth" contingency. I have been teaching since 1978, with a focus on early childhood for the lion share of those years. In all those years I have witnesssed and worked with a variety of children, from a variety of backgrounds, with a variety of needs, with a variety of abilities, and a variety of challenges. It is my experience in this area that allows me to celebrate, not only each child's unique development, rate of development, as well as each child's expression of development. Anyone who has had extensive experience of children within the early childhood range (birth to approximately 9 years), and has a good understanding of early development - both in the "regular and special education realms" - knows one thing to be true - play is learning. Now, I have had all sorts of children come across my path play with items in both a traditional, as well as non- tradional, way. I don't know that I would label it as either appropriate or inappropriate, as that would prescribe a set formula for creativity - don't you think. There are national organizations such as Odyssey of the Mind, and Destination Imaginatiiion whose entire focus is to apply creative applications and solutions to everyday objects and problems. While observing children I have seen kitchen plates become goggles, tubes become movie theaters, farm animals become tableaus for "fashion shows", milk crates become igloos, and shoeleaces at the sewing center be either spaghetti of pirate booty. My least favorite is legos, blocks, or toast become guns...my definition of inappropriate - however, unfortunately, developmentally appropriate. I would never consider any of these expressions forms of self stimulating behaviors. I have witnessed the plethora of self comforting behaviors which people call "stimming". I tend not to use that reference to behaviors because it seems to apply a negative label to a number of behaviors that - for that particular child - are appropriate. I can say, again from first hand experience, that what I see in Bud's current Still Life is a continued exploration of colors, textures and contexts. In the book King Bidgood's in the Bathtub - an array of sumptuous foods and fruits are brought to him in his tub...in his castle...hmm - appropriate? Here's to creativity, self expression, and appropriate play. Cheers. mh

Just a point of clarification in case there is any confusion. There are two "Anonymous" commenters here. The first three "Anonymous" comments appear to be from the same person. However, the most recent Anonymous comment is not actually anonymous at all - it's signed "mh," and is from Bud's very wise and always insightful teacher, known to readers of this blog as "Mrs. H."

And also, Jannalou has a fantastic post on this topic on her blog, at: http://comautworld.blogspot.com/2006/05/what-is-play-and-what-is-stim-and-when.html

oh my! i love bud's artistic arrangements and i especialy love his saying, 'say cheese, fruit.' he is a star!!!

p.s. frankly, we ALL stim, some more, some less. i don't use the word, 'stimming' i see no helpful place for it. it doesn't really describe anything and it doesn't take into account the purposeful nature of behavior.